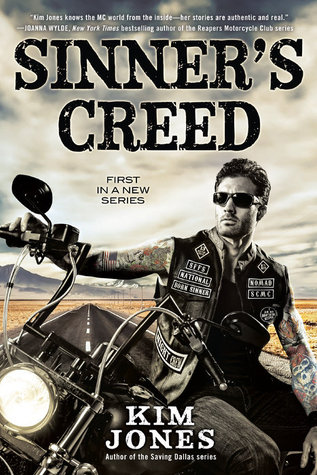 For September’s Wild Card theme, I chose a book I heard a lot about earlier this year. I picked up a copy of Sinner’s Creed at the Berkley signing at RWA16, intending to use it as a giveaway for my mailing list.  But I read the first chapter and was hooked.

Sinner’s Creed is set in the world of outlaw bikers and according to her bio, author Kim Jones is part of that world as a biker’s “ol’ lady.” It’s not a pretty world. But the two main characters and their story—told entirely from the hero’s POV– was so compelling, I kept on reading, even though I knew the story would go places I wouldn’t like.

Dirk is a Nomad, a roaming assassin for the Sinner’s Creed motorcycle club. He’s never known another life and considers himself an unredeemable monster.  The one bright spot in his life are his chance encounters with a beautiful blonde girl from a world far removed from his.  Saylor is innocent, and to Dirk, an angel out of his reach. But one day, he finds her walking along the side of the road in tears, demanding that he take her with him when he leaves town.

Dirk’s life as a Nomad doesn’t allow room for attachments or love, but with Saylor he finds both. He changes, and though he’s still part of a brutal world, he’s never cruel to Saylor.  But Saylor has a secret, and without spoilers, I can’t reveal it, beyond saying that it ends hope for an HEA, at least in the conventional sense.

Dirk doesn’t expect he’ll find happiness, but romance readers do expect it, which is why this book raised such a controversy when it was released.  I won’t weigh in on whether Sinner’s Creed qualifies as a romance, but it is an excellent example of why the RITA Awards need a category for Fiction with Romantic Elements. This book was well-written, with fully developed characters acting out a compelling story in a vividly depicted world.

While I won’t debate Sinner’s Creed’s romance novel bonifieds, I will offer another view on this book, one some may find just as unexpected. Despite the sex, drugs, violence and f-bombs, Sinner’s Creed is at heart, an inspirational romance. Saylor’s faith is an integral part of her character, and in an early scene, Dirk finds her kneeling in prayer on the floor of gas station restroom. Though Dirk considers himself beyond redemption Saylor doesn’t, and near the end of the book, he prays the sinner’s prayer, well-known to Christians.  It’s not a big, climactic moment, but a quiet one of only a few lines. Yet it completes Dirk’s journey and insures his reunion with Saylor.  While it’s not a conventional HEA, it’s deeply moving.

While fans of traditional inspy might be put off by the crude language, sex and violence of Dirk and Saylor’s world, I highly recommend Sinner’s Creed to those looking for a faith element in a gritty mainstream romantic novel.  It’s not an easy book to read, and plenty about it will break your heart, but don’t be afraid to climb on and enjoy the ride.

One thought on “September #TBR Challenge”