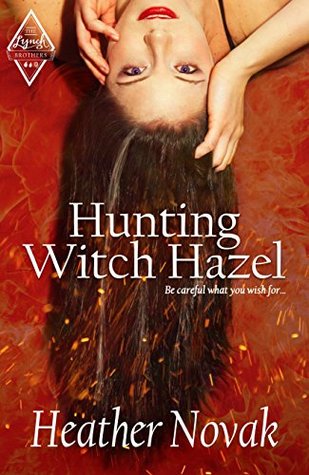 This year, I’m rockin’ the novellas.

What began as an extended homework project, as I attempted to write my own novella (which I finished, stay tuned for more on that topic) has turned into full-blown love for fun-sized fiction. Since it’s almost Halloween, what better time to enjoy the book equivalent of a mini Kit-Kat bar?

For October’s Paranormal read, I picked Hunting Witch Hazel by Michigan author Heather Novak, whom I had the pleasure of meeting this summer at Rust City Book Con in the Detroit area.  Heather and I were on an author panel discussing settings and world building—I was talking about Russian figure skating and Heather was talking about the UP.

For those outside the Midwest, that’s Michigan’s Upper Peninsula, a beautiful, remote and slightly spooky region of forests, tiny towns, supper clubs, lighthouses and snow. Lots of snow. Heather’s college was in the UP and said she was inspired by the feeling of magic that the place has. I totally got it, and picked up a copy of her debut,

This New Adult novella is set on a fictional college campus in the UP, which seems to have more than its share of magical residents—witches, demon-girls, werewolves, and a ghost.  The heroine, Hazel Evanora, is a witch with a dead sister only she can see, a mother who became addicted to black magic and whose debts Hazel is struggling to pay.  The hero, Grayson Lynch, is a witch hunter from a family of notorious witch hunters who wants to capture Hazel’s powers and barter them for his brother’s freedom.

I really enjoyed Hazel, Grayson, and the colorful cast surrounding them, including Hazel’s ghostly sister Romi, and her friends Raine and Frank.  Grayson, as the new guy in town, attracts Hazel’s interest, though she’s not sure she can trust him.  Grayson is instantly taken with Hazel and sympathetic to her desperate financial situation. This complicates his mission to steal her powers, which she’s selling off bit by bit to pay her mother’s debt.  I also liked how the author paralleled Ginger Evanora’s black magic addiction to a drug addiction, which made it easy for non-magical folks (and readers) to wrap our brains around.

Where I struggled, was with feeling like I’d walked into a movie fifteen minutes late, and had to detangle the various plot threads with incomplete information, especially when it came to Grayson, his family, and his captured brother. In fairness, this could be due to my disjointed and distracted reading during a hectic month, but for a short book, this was a complex story which might have been better served by a longer format.  But overall, I liked the characters, Novak’s writing, and her enjoyably weird world, and will give the next book in the Lynch Brothers series a try.