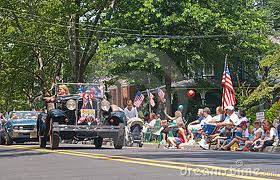 When I was a kid, my family went to our city’s Fourth of July parade every year. I’d stand on the curb with my parents, sister and brother and wave to the people walking with the bands, floats and decked out convertibles. Sometimes, I’d see people I knew. But every year I came away wishing I’d been one of those walking, rather than one of those watching.
Maybe it’s a buried desire to be in the spotlight (note, clever blog theme tie-in here). Maybe it’s feeling part of the community. But as an adult, I’ve been in our town’s Fourth of July parade a few times. Know what? I love it.
Each time is a little different. There was the year of sweltering heat, walking with the Arctic Blast VBS float, which featured a Styrofoam igloo, a teenage boy in a chipmunk costume (I’m not making this up) and my unhappy five year old, who doesn’t share my love for center stage. Another year, the float featured our church praise band –which includes my husband, rocking through a set that included Norman Greenbaum’s “Spirit In The Sky.”
What’s so great about walking three miles on a hot mid-day in July? Hearing the music. Watching kids scramble for candy. Seeing friends. Celebrating America on it’s big noisy birthday.
Really, what other kind would we have?
In a few hours, I’ll be at it again. This time, it’s with the youth praise band which includes my son. They’re playing a Southern-rock cover of “It Is Well With My Soul,” and I’ll be walking alongside, looking for friends in the crowd and hoping my left ankle cooperates.
Happy Fourth, everyone. It is well.

One thought on “Not Letting The Parade Pass By”